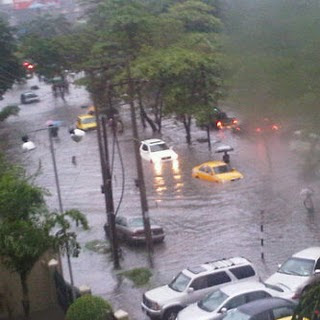 It’s raining again in Lagos this morning. Yesterday, it rained non-stop from 9 in the morning until 9.30 in the evening. It was a continuous symphony of heavy torrential downpour followed by mid-level rainfall that lasted for hours. Although no one measures rainfall levels, this is probably the longest stretch of downpour I have experienced in Lagos. For no reason at all, I can only think of the ‘purple rain’ song by Prince. Not that there is any link that I know between the two.

As much as I love the coolness and the smell of freshness that rain brings, I am also mindful of its destructive impact on the city and the difficulties it brings to commuters and other city residents. Many commercial buses, given their substandard state, wisely stay off the roads when it rains leaving commuters stranded for hours and being ripped-off by the few buses that can brave the downpour. Also, houses are easily flooded due to lack of proper drainage and in some areas, rain-induced erosion may be irreparable. A few days ago, after another downpour which was mild in comparison to what we are currently experiencing, I watched a father gave a gut-wrenching account on television of how two children went to school and only one came back home, the other swept away by the flood.


There are very many reasons why Lagos finds it difficult to cope with heavy rainfall. For a start, drainage infrastructure is non-existent, so even for the most affluent part of the city such as Lekki, Ikoyi and Victoria Island; rain is a curse not a blessing. Added to this are the other issues of poor planning, illegal buildings on drainage paths, and as pointed out by a commentator, many compounds are completely concreted resulting in all rainwater being drained onto the roads rather than naturally into the soil.

I have no firm information on the damage this rainfall has caused, but Lagos State has today closed all schools, and homes and offices in many areas of the city are said to have been flooded too. Typical of the stoic approach to all things in Nigeria, people have made light of the downpour with blackberry broadcast such as this one:


“Rain has reshuffled Lagos, houses are being moved to new locations... Eko Hotel now in Abule Egba; MM2 in Orile; Kirikiri prison now in Oniru; Unilag now in Ikorodu; Alausa Sectariat now in Badagry. Please confirm your office location before setting out today so you won't miss your way.”

The reality is that apart from a statement released by the Lagos State Environment Commissioner, there is not much happening, no statement from the President and no word from the National Emergency Agency. This problem will not go away if not tackled. It can only be solved if we all behave responsibly - Lagosians and government alike. Perhaps as Andrew Onalaja commented, we can begin to solve this problem by “breaking up the concrete in all our compounds compressing it as hardcore and covering the entire area with gravel, that way we can get rid of some of the water that would otherwise flood our roads.”

Importantly, we need responsible governments with the political will (not just in Lagos), to not only enforce planning rules, tackle erosion, but also provide an efficient and affordable refuse disposal system so that Nigerians can stop dumping refuse in the gutters, canals and rivers.