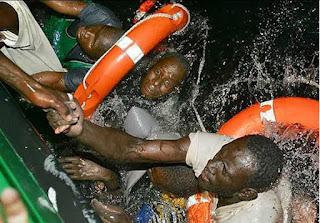 Seven people died on Monday 05 September 2016 on the Mediterranean. What made this peculiar was that their deaths were live on Sky News. The tragic event was filmed and broadcast by a crew from Sky embedded on a mercy ship that rescues migrants from the coast of Libya. For viewers, it was high drama on the high sea, except that on this occasion, it wasn't fiction.

Earlier that day, all the migrants on a separate dinghy (over 100 people) were successfully rescued. However migrants on the second dinghy failed to follow instructions. In attempting to rush for safety, their overcrowded vessel capsized and seven of them lost their lives in the water. As would be expected, it was heart wrenching to watch.

Immediately after the ordeal, Sky News interviewed some of the migrants, and it turned out that three of the four survivors interviewed were Nigerians. With this statistics, it is easily conceivable that many of the migrants on this human cargo including those who lost their lives were Nigerians. According to the International Organisation for Migration (IOM), 37,500, which is a fifth of migrants who arrived in Italy last year are from Nigeria. One of the rescued migrants gave his name as Obafulu and said he left Nigeria 15 years ago drifting from country to country. His adult life mostly wasted on a nonsensical nomadic rendezvous. Why would people risk their lives to go on this horrendous journey? More of that later.

Just over a month earlier, in a separate incidence in faraway Indonesia, three Nigerians, Seck Osmane, Humphrey Jefferson Ejike and Michael Titus Igweh were among the four people executed for drug trafficking on the 28 of July 2016. A further 10 convicts expected to be executed had a last minute stay of execution. Four of these 10 are Nigerians. In 2015, half of the eight people executed in one day (29th April) for drugs offences were Nigerians. 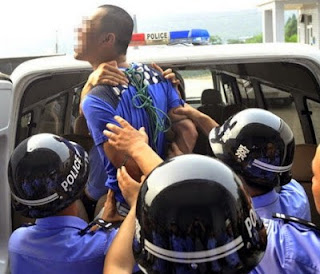 The question is: Why are Nigerians in the forefront of both drug trafficking in the Far East and people trafficking on the High Seas of Europe?

It is easy to dismiss the predicaments of these two sets of Nigerians. However, apart from the obvious reasons, I see an important similarity between Nigerian migrants on the high seas and Nigerian drug merchants to the Far East: it's ignorance fuelled by illiteracy. From my past experience of working with Nigerian migrants in Spain, I found out that an overwhelming number of them believed that it was easy to cross the Sahara. Further, they believed that once in Morocco, they only needed to jump to make it to Spain just as it seems on the map. None was prepared for the perilous journey through the Sahara where women are repeatedly raped and the men are often killed. Some did not realise that the Sahara has extreme temperatures and can be unbearably hot in the day and freezing at night. One of them narrated how only two of them woke up from the four that slept one evening in the desert. The other two had frozen to death before the next morning, as they didn't have enough clothes to keep warm. For many of these migrants, their gullibility is galling but sadly it is an evidence of their almost total illiteracy. Poor education means they are incapable of logically processing most things, which leaves them as suckers for any and every stupid theory. The reality is that many Nigerian migrants are not fleeing from war, they are simply gullible people preyed upon by evil people.

In the same vein, the vast majority of Nigerians caught trafficking drugs to Indonesia, Thailand, and Singapore are oblivious to the penalty that awaits them if caught. Those who may be aware might have been promised invisibility (through black magic) by their handlers. Both of these situations reveal the total ignorance of drug traffickers. Just like the migrants, the root cause of their misfortune is illiteracy.

So what could be done? We might not be able to save those who have been caught in Indonesia or those already on the Sahara route. What we must do is stop those contemplating these deathly trips. It is believed that over 400 migrants have died crossing the Mediterranean this year already, while over 5000 people lost their lives in 2016. It is now time for our government to be conscious of the fatal consequences of people smuggling and drug trafficking. It is time that we arrest these two evils.

Of course, we must own up to the fact that a disproportionate percentage of migrants, particularly young girls who end up as sex workers in Europe are from Edo State. Save the Children estimates that 90 per cent of Nigerian girls entering Italy are victims of sex trafficking. We need to look at why this is so and how to prevent it.

Given that ignorance and illiteracy play a major role in young people being sucked into these trades, we need a structured and enduring programme of education. This should be pushed at schools, on TV, at religious and social institutions, and using every means possible. We should use traditional leaders, local, state and federal governments and agencies.
We can end this evil and we must. PostcardfromLagos