Does a Male Child Matter? 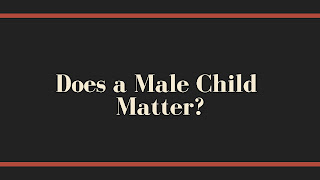 I do not know how the desire to only have daughters came. But it is probably not unconnected with the fact that I felt there was so much more that could be achieved with them than male children. For a start, you could plait their hair, and buy them all kinds of fancy dresses. I have also been regaled with colourful stories of how girls are closer to their fathers. No doubt, I would have been equally grateful if I had boys.

I am sure we all agree that every life is a gift. An important gift with limitless potential. Every life is also an image of the Creator, bearing the breath, imprint and blessings of the Almighty. So, every life matters as each person has an assignment to fulfil. Some assignments may be big, some may be comparably small. Some people may become popular; some may not. However, as it's often the case, the people that have the greatest impact are not always the most popular or easily recognisable. 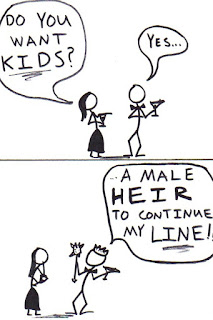 I decided to write about this issue because I have seen the way male children matter to men and women alike in Africa. For many women, it is because a male child legitimises them in their 'husband’s home,' and hopefully in his heart. For many men, a male child is proof of their virility and, by extension, a badge of honour before friends and family. Because of these factors, the quest for a male child is relentless for some. I know of couples who had a fifth, sixth and seventh child in the pursuit of that elusive male child. Ignorant of the fact that it is the man, not the woman that is responsible for determining the sex of a child, some men 'condemn' their wife for what they consider as the ultimate sin of not 'having a male child in her.’ Some men take mistresses and break their homes in the search for a male heir.

While I do not want to begrudge any man for having the desire for a male child, some of the reasons behind the desire do not stack up when closely inspected. The most important reason for having  a male child at all cost is the need to have someone to 'continue their name'. I have however seen examples of men who have two or three children, all male, but by an irony of fate, do not have male grandchildren. Would a man who had two or three sons not have thanked his stars believing his name is secure forever? Yet it appears that the stars don't always align to our personal preferences. Evidently, it is futile to attempt to determine the future when none of the levers are in our hands.

What about the many instances when a male heir invested with the hopes and aspirations of his parents fail to live up to that expectation, and in some cases, even destroying the name. Would it not have been better to have a female heir who made the parents proud?

In any case, of all the important things in life, why should one be overly concerned with what happens after you are long gone? Is it not enough to give a good education and a fantastic legacy to all children irrespective of whether they are male or female? Why bother when the future is not in your hands to control?

Perhaps, it is wise to consider another interesting angle that is increasingly common. Many young men now alter or change their family names altogether for religious or cosmetic reasons. Rather than the Ogun, Ifa or Sango prefix, they prefer new improved versions such as ‘Oluwa’, Ola or ‘Ade.’ Some adopt a different surname entirely. I can imagine their fathers churning in the grave for this unpardonable ‘sacrilege’. Who knows; their own children may want a more improved version in 25 years.

Does a male child matter? No doubt! However, if you consider the above arguments, you may want to challenge the extent to which this is the only truth. Perhaps the truth is: Don’t all children matter? What we need to do is to educate people on this fact and strengthen our laws to ensure male and female children are equal before the law. PostcardfromLagos