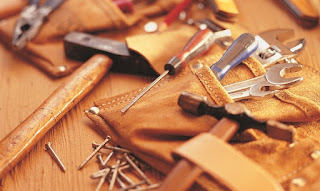 He was one of the teachers that every student had to notice in high school. This wasn't because of any peculiar features of 'fineness' or stature. He was of medium built, slightly shorter than average height, and much older than most of the other teachers. He also had two of his children in the school, Rotimi who was a few years ahead of me and Ronke who was my classmate.

Although his real name was 'Mr Adeniyi,' however, he was popularly known as 'Baba Woodwork'. He was the only woodwork teacher in the school, and every student had to take the subject in year three, therefore no student could escape his tutelage. Baba Woodwork had his own little empire, one of three large rectangular rooms in a secluded building far removed from our usual settings. Nestling among green shrubs and seasonal maize farm, the building was divided into three sections - a wood workshop, a metal workshop and the technical drawing studio. Together, these three were the technology subjects of that era.

At the wood workshop, 'Baba Woodwork' held sway with a mixture of steely discipline and plenty wit. He was unorthodox and it was apparent he enjoyed the topic he taught. We learned about the 'cross section of a log'. This was a 'sure-banker' question in every examination. We had been told by our immediate 'seniors' who were told by their own 'seniors,' and we made sure to inform the class below us of this hot topic. Everyone passed his subject too. I got a 90 and I am sure most people in my class got similar scores.

From him, we  also learned the different types of trees. Obeche, Iroko, Mahogany are some of the ones I can remember. He also taught us how to use saws, shavers, chisels, grips, drills, braces and plumbs to shape wood and make basic furniture.

Although I remember those days with great fondness, I was not particularly good with making things, so I dropped the subject at the earliest opportunity to do so. Still, no one could ever forget or get away from the clutches of Baba Woodwork.

Apart from his teaching peculiarities, Baba Woodwork was a member of the white garment 'Aladura' sect. On the rare occasions that he conducted morning assembly, he would depart from the normal Anglican Songs of Praise hymns. Instead, he would go for the fast tempo Yoruba Aladura songs. A favourite of his that I would never forget is:

The English translation is:

Why my friend did you join the Aladura sect?
Jesus beckoned me to come
You too can join if interested

He would lead the chorus and also improvised. We, the pupils heartily created the accompanying music with loud synchronised hand-clapping. Those occasions were a huge but enjoyable departures from the stiffness of singing 'He who would valiant be' which, I must say, remains one of my favourite hymns.

Baba Woodwork was also the teacher in charge of commissioning and distributing the school uniform. His responsibilities included the selection and engagement of the team of tailors that designed, measured each student and sew the uniform. He used that office to great effect too.  He banned side pockets from our school shots and trousers. His reason was that students disrespectfully put their hands in the side pockets whilst addressing teachers. So we only got a back pocket.

My enduring memory of Baba Woodwork was his waspish rejection of the moniker 'Baba woodwork'. Given that he is a Yoruba man, it appeared he chose to believe the literal translation of the appelation as 'father of woodworks', rather than as a  honorific courtesy to his age and work. So at one point, he began to react to anyone who referred to him as Baba Woodwork with this withering but witty refrain:

For his commitment to work and his witty unorthodox approach to teaching, Baba Woodwork, sorry, Mr Adeniyi was one of the greatest teachers of my early life. PostcardfromLagos