WHY DO WE MAKE LIFE DIFFICULT FOR SINGLE PEOPLE? 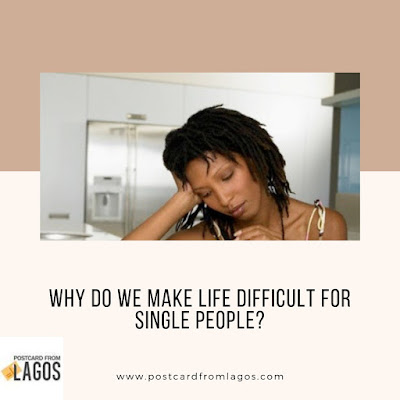 In the opening statement of her romantic novel 'Pride and Prejudice' published in 1813, Jane Austen observed "it is a truth universally acknowledged that a single man in possession of a good fortune must be in want of a wife." That was in the early 19th Century. In 21st Century Nigeria, we have flipped this statement, and assume that every woman over 20 is in desperate need of a man. It's a stereotype that unleashes the 'poor Ola,' or 'poor Ngozi' look.

Undoubtedly, one of the most shameful characteristics of our society is this unspoken, but widespread grand design to make life unnecessarily difficult for people who are not married. You probably have done so recently without given a thought to it! Although this action is directed at both men and women, it is much more pronounced against young women. The approach includes the subtle, pseudo-religious 'it is well,' 'I am praying for you' phrases, or the pained 'I feel for you' look. Sometimes it is much more aggressive - "When are you getting married?" "Do you have a steady boyfriend?" "When are you settling down?" "If you don't 'package' yourself very well,  you may miss the boat" etc. As we all know, the phrase 'it is well', borrowed from the Biblical Shulamite woman is a popular euphemism for desperate situations in Nigeria. It has become our own version of 'Houston, there is a problem.'

I suppose, it is understandable if this kind of pressure comes from parents. After all, it's in parents' DNA to be concerned (even unduly) about their children. However, what is loathsome is how friends, acquaintances, work colleagues, and sometimes strangers make it their responsibility to impose the marriage rule on innocent people. The fact that this may not be malicious does not absolve anyone of the damage being done to those at the receiving end. Our society makes it look as if an unmarried lady has a problem. We have honed this rule so well that we check people's ring finger to find out where they belong. To us, there are two categories of people - the 'lucky' ones (married) and the 'unlucky' (unmarried).

As stated above, our ladies fair worse in this categorisation. 'Yours will come o,' 'you will not be left behind o,' are more of the pressure phrases we routinely employ to nag unmarried ladies, some of whom are barely out of their teens. 'Naggers' who are not content with these little niceties take things a step further by asking pointed questions about a woman's competitiveness in the bridal market.

Our churches have not helped either! Not only have they not taken a stand against this unhelpful situation, they encourage it by creating the belief that being unmarried is linked to being jinxed. We treat unmarried people as if they have been hexed or are in the throes of a deadly virus. Innocent parents or family members are often accused of being the ones behind an unmarried person’s perceived 'misfortune.' This phenomenon creates fear and a path for naive singles to be controlled and exploited by dubious religious leaders. It also creates an impression of women as commodities that must be traded off before a sell by date. Sadly, this belief is so ingrained that many ladies have become complicit. They get into a panic mode if they are not married at 25. I blame them not! It is difficult to shake off a narrative that has been driven into you from birth.

The consequence of these hydra-headed pressure is that some ladies, against their better judgements,  date, and in many instances, marry guys they know are clearly not right for them, just so that they could keep the pressure away. Our society thus clearly become complicit in pressuring young women into doomed marriages. That's not the end. On their wedding day, we start to put the newly married couple under a different form of pressure often using the avenue of prayer. 'In nine months’ time, we will come and rejoice with you again.' This generates a loud response of a-a-a-men from un-thinking listeners. What if the couple are not ready to start a family? What if they want to climb mountains, and explore the world first? What if their career plan is not in tandem? Why pile on them the pressure of children when they hardly know each other? What if there are unexplained fertility issues? All of these appear not to matter. To us, what we want supersedes what an individual or a couple wants. I think I might just know what I am talking about as I was married for 16 years before I had children.

I have found that many single people can handle their single status but for the unrelenting pressure of the nosey parkers who make their lives hell. Apart from choosing a wrong partner, some have lost their self-esteem, and many are being emotionally damaged by the ocean of pressure from every corner.

1.       For a start, why don’t we just leave people alone. Yes! Leave people alone! However much you may be tempted, refrain from asking any intrusive questions about marital status.

2.       Given that we are outwardly a deeply religious society,  if indeed you are praying for somebody about marriage, keep this to yourself. There is no need to let the beneficiary know. Shouldn't prayer be between God and the supplicant? "But when you do merciful deeds, don't let your left hand know what your right hand does", says the Lord in Matthew 6:3

3.       Let's stop targeting single ladies in our churches by 'blackmailing' them to come out for prayers so that they may find a husband. These exercises can be humiliating and is downright wrong.

4.       While it is the desire of many people to marry, it is not impossible that some people might have chosen, for whatever reason, not to do so. Their choices should be respected and not in any way impugned.

5.       The reality of life is such that some ladies that do desire to marry might not have been asked. We should never make it their fault that no one has asked for their hands in marriage.

6.       We should also note that some young men are aware they are not yet mature enough to marry. It would be criminal to pressure them into doomed marriages.

7.       Finally, we must become a society where people are treated with dignity whatever their marital status. Life is complicated enough. Let's not make it any harder. PostcardfromLagos
Posted by Postcard from Lagos No comments: