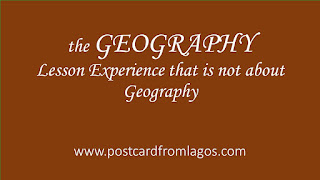 It was a Geography class in the  fourth year of secondary school. Each subject ran for about 40 minutes. However this particular session was what we referred to as a 'double lesson' as it ran non-stop for 80 minutes. Our Geography teacher was Mr Ojoxxxxx who was notorious for his tendency to be tough and uncompromising.

Mr Ojoxxxxx was very good at teaching his subject and seemed to enjoy doing so. I can still hear his booming voice enthusiastically talking about 'Pampas of Argentina, Prairies of Latin America. My memory of Geography lessons was that they usually take place in the afternoons. The tropical sun would be out with fury and would easily have created a river of sweating students but for the cross ventilation in the classrooms. In the outside sweltering sun, one can make out a lone pupil digging up a large tree or using machete to tackle a sea of very tall grass in one direction. A different direction may show another pupil on their knees.  Both would be under punishment for a misdemeanour which may be as mundane as being two minutes late to school that morning.

Mr Ojoxxxxx was also fond of using what we referred to as 'Black Maria' as his instrument of choice to discipline eering students. A student may err in many inumerable ways including being late to his class, not answering a question correctly, dozing while he teaches, talking in class, failing a test etc.

The 'Black Maria' is a thick round cable of about one inch in diameter with a hollow inside. I suspect they were discarded phone cables which somehow found their ways into the hands of teachers determined to prove their miserable prowess at 'teaching difficult pupils a lesson.'

It was not exactly Mr Ojoxxxxx that we feared, it was the Black Maria and the pain it inflicted when it hits your back, buttocks or hand with brutal force. It wasn't only him that was fond of this instrument of torture, some other teachers including our former principal Mr Faxxxxxxx also wielded it with glee. Those were really difficult days to be a pupil. On a bad day, you could be subjected to 'corporal punishment' from multiple teachers, many of whom picked offences easily and derived a sadistic joy from this form of abuse.

Years later when I briefly taught at a high school, I remember that a fellow teacher publicly flogged a female student widely known to be his lover after their affair had gone awry. These were the different faces of abuse prevalent in those days.

Back to the Geography class that sunny afternoon, we had only just begun the lesson when I felt a deep and pressing need to use the toilet. I approached Mr Ojoxxxxx to inform him, but he rejected my plea to leave the class. I couldn't believe my ears. The knowledge that it was a 'double lesson' compounded my dilemma. It would take almost one and half hours to the end of the lecture. There were no options. I was only 12 and did not have the mettle to walk out of the class. It was not the done thing in those days. I stayed in the class and employed every skill a 12 year old could muster to hold myself back. It must have been one of the longest 80 minutes of my life.

As soon as the class ended, I dashed out of the class towards the school toilet some 150 metres away. As I made my way through the lawns, I could not hold it any longer. I continued to run perhaps faster than Usain Bolt. Although I was not amused, I however felt free from the bondage of Mr Ojoxxxxxx. I was relieved. It was not a good experience. There was no change of clothing. It didn't matter. All I felt was relief. PostcardfromLagos


Postscript - When I wrote this essay on a Sunday afternoon in February 2015, I naturally included the name of the Geography teacher. However, when I decided to publish it recently, I took the decision to protect his name. My intention was not to blacklist him. Perhaps Mr Ojoxxxxx felt it was an attempt to play truant on my part. Or the session that day was so important that he didn't want me to miss out. I would never know but even if there was no justifiable reason for his action, I still consider him a victim of his time.
Posted by Postcard from Lagos