2015 ELECTIONS - WHY NIGERIANS SHOULD STOP DANCING AND START THINKING 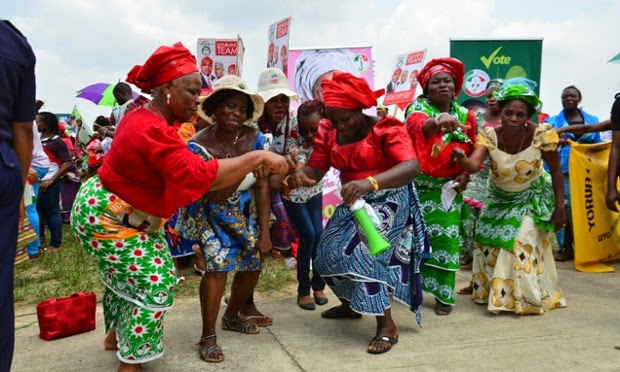 A few Sundays ago, we had just left church. Rather than go home, we made a short detour to one of the side streets where assorted fruits and other food items are varied and cheaper than what obtains where we live. Our children were sound asleep in the back of the car oblivious to their parents’ shenanigans. Everyone on the street appeared to be haemorrhaging sweat as the scorching sun unrepentantly rained down its heat. My wife alighted from the car to buy fruits at one of the stalls. I drove a bit further to make a U-turn.

Then I saw her. She looked worried and unkept. She had a baby on her back held with a tiny ifunja. Just like the mother, the baby whose sex I could not make out looked rather unkept too.  In Lagos, there are many people who are destitute and poor, however, this lady stood out to me. She looked at me as she approached. I felt awkward and she walked away. My car was bang in the middle of the road at a T-Junction. I summoned up courage and hooted to get her attention, she glanced back, I hooted again and beckoned to her to come. As she approached, she began to cry, I offered her money, and she thanked and prayed for me, ending with the customary name of Jesus. After she left, I felt I should have done more, perhaps ask about her general well-being and possibly take her number. I didn't. I regret not doing so.

There are many people in the same situation as this woman and her child. Our governments – local, state and national have no strategy for them. None at all. This is why I am a bit vacant about the 2015 elections and the brouhaha it has generated. Everyone appears to be talking about it. The discussions may appear unintelligent, lame and parochial at times, however, Nigerians deserve an Oscar for being consumed by the elections.

What gets me worried is that our governments have no strategy for anyone who has the misfortune of developing cancer or any other serious diseases in our country. How our politicians sleep at night is a marvel to me. In 2015, Nigeria still has no nationwide emergency telephone line. So in the event of a fatal accident, many of the casualties bleed to death. In the last month alone, two young people in their twenties received the distressing news that their eye problem is inoperable because of the prolonged damage to it. Both had no recourse to medical help until a charity with which I am involved intervened. Our politicians on the other hand, think nothing of going abroad for medical attention and flaunting it before the people. Of course, they know that Nigerians cannot fight back. Having experienced prolonged oppression; the people are incapable of knowing they have rights let alone fight for these rights. Most Nigerians are battling to survive and eat, fending off death on the road, in the hands of armed robbers, ‘one-chance’ agents and ritualists and from every other issue with which they are confronted. They have little or no strength left to know that the government owes them a duty of care for good roads, drinkable water, electricity, and security.

Everyone knows this, from church leaders to traditional kings, the intelligentsia and journalists. We all know that our governments are evil and are only interested in their personal well-being. However, all of these people too – journalist, church leaders, traditional rulers - are fighting for their mouths and survival. In other countries, the media are on the side of the public and they hold the government to account on every front. In Nigeria, Reuben Abati, probably the most prolific Nigerian columnist joins a corrupt and visionless government and turned native.

Last month, Bishops of the Church of England published a 52 page open pastoral letter calling for political parties to come up with “a fresh moral vision of the kind of country we want to be” before the UK General Elections in May. Their letter touched on such issues as ‘education, ‘who is my neighbour’, ‘political neutrality’, ‘what voters should ask of candidates’, ‘the role of the state’, ‘role of family’, ‘the economy’, ‘poverty and inequality’, ‘unemployment’, ‘health’, ‘welfare reform’, ‘immigration’, ‘environment’ and many other issues. In Nigeria, like little children meeting Father Christmas, our church leaders become excited whenever the president and other politicians visit their churches to canvass for votes. Some of them believe that a politician’s visit is a measure of their success in ministry.

In other countries, voters take their politicians to task on the issues they are passionate about. In Nigeria, the electorate are mostly illiterates (including those who have a degree) and do not have the intellectual capacity to take a politician to task. Instead they fawn over politicians when they meet them. The Nigerian electorate have developed a Stockholm syndrome loyalty to the politicians that colonise and encage them. Don't take my word for it, watch any of the rare occasions our politicians meet electorates on TV or read any of the political threads online. What you hear from the electorates are “your excellency sir”, “ride on my president”, “we are with you”. You will also see commentators throwing abusive words against each other along ethnic or religious lines. Typically, the important issues are neglected. Anyone that brings them up is shut down with a pseudo-religious abuse.

As election 2015 approaches, our politicians have been gracing our television and streets in over the top clothes and laughable postures to ask for our votes. They are distributing rice and cooking oil to poor people and hosting community parties. Some are buying votes for 5000 naira. The politicians know that poor people are not bothered about the future, they are concerned about what they will eat today. This is the way politics have been played and our politicians are in no mood to change the status quo. It suits them perfectly.

The election posters show how little regard the politicians have for the electorates. Many of them have no serious policy agenda. They certainly believe the way to win an election is by looking good in pictures or posing in white jackets and massive geles. Instead of serious policies, Mrs Tinubu’s campaign slogan is “Restoration 2015, prosperity for all.” What this means is beyond me. She knows she doesn’t really have to campaign, the people are gullible. She would win. Goodluck Jonathan has hired every space on the Internet with GEJITES, TAN, etc. to convince us of how many first he has notched as Nigerian president including being the first Nigerian president to have a Facebook page. Unfortunately we can hardly see any of the so-called achievements though we open our eyes wide. The person who is almost certainly going to win in my senatorial district looks like a mafia boss in his campaign poster. I have been informed that he really is.

So what are the real issues?

Health - Why do we regularly see on the pages of our newspaper appeals by individuals for funding to have a kidney transplant in India? Is there no government in Nigeria? I am not advocating for governments to rise up and fund such individual cases, the fact that the people concerned are forced to seek help through the media shows a fundamental failure of our health system. What is the strategy of the minister and commissioners for health for comprehensive health care for every Nigerian?

Education – How many ministers and politicians send their children to school in Nigeria. Why are our politicians mortgaging the future of this country by neglecting education and allowing it to slide over the years? We have no technological basis, our university students live in ghetto hostels, their lecturers are not well paid and unappreciated so they do the barest minimum. Last month, I was at Yaba College of Technology where a generator on the second floor of one of their buildings spewed out noise and fume. No one can learn a thing in an environment like that.

What does the Minister of Education really do?

Welfare – What is the government’s strategy for the likes of the woman I saw that Sunday afternoon and for her child. This is not a federal affair only, What is Lagos State doing? There are many women like this in our country, some begging for money on the roads, some married to an abusive husband if only for protection and provision, some are supported by family, some slave away for 10,000 a month cleaning toilets and offices. Nigerians must think carefully before they vote.

Employment – The federal government’s strategy towards unemployment is a joke. Goodluck Jonathan set up SURE-P to get young people to paint the side of our highways green white and green. He still hasn't sacked Abba Moro, his Minister for Interiors who last year, caused the deaths of several young people through a bogus employment drive. Who is holding the president to account? Not the press, not the so-called ministers of God whose god is their belly.

For me the greater issue is not even the presidential and gubernatorial elections. I feel every Nigerian should be more involved in who represents them at the state and federal assemblies. The test is very simple. If you have never seen the member of your state house of assembly, house of representative or senator, whoever they may be, vote them out this election. The next lot will learn to represent you better.

So rather than get animated about the elections, I wish we all can ask these questions and use our vote to determine the future of our children’s children.

I urge you to do so.