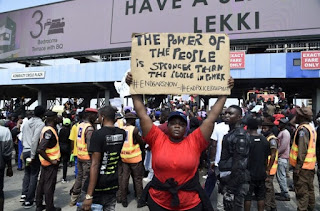 Buhari has murdered sleep. He’s shed the blood of innocent young protesters. We are nailing our colours to the mast of freedom. We are no longer afraid.

This is 2020. How come the Nigerian government and its handlers think they can continue to fool us. This was a premeditated massacre. CCTV cameras were first removed, before innocent young people were mowed down for protesting against extrajudicial killings and bad governance. To the government, our youths are dispensable. Big mistake! Every Nigerian is a Lekki Protester from now on.

We know the president and the political elites see peaceful protests as inconvenient. So, in the name of acting tough, and because of the fear of losing control, the man who swore to defend our constitution very swiftly engaged in killing its young. For five years, Buhari had no credible healthcare agenda for the country. For five years, he couldn’t bring up a coherent strategy to end child poverty, build new hospitals, but in two weeks he unleashed the military to kill our young who were protesting lawfully and peacefully.

No doubt, the government will argue that they acted because hoodlums had hijacked the protests. These are the same state-sponsored actors sent to create confusion a day before. For two weeks, this young people had proven their patriotism by their civility and high level of organisation. They did not loot, and no violence was recorded. If anything, they created a mostly carnival atmosphere. The questions for the president and our politicians are:

Why is it that it was only after two weeks that the hoodlums came?

Why did you not send the police to arrest the hoodlums and protect the protesters.

Why did you have to remove CCTV cameras if you wanted to stop the hoodlums.

It is clear that the governor of Lagos State has taken sides with the oppressors by coming on TV today, and oozing with practiced sincerity announcing there were no fatalities. No one is fooled, the soldiers must have been real professionals trained to shoot only people’s legs in the dark. As soon as the shooting started last night, eye witnesses reported dead bodies being mopped up by the military.

It is now time for real believers in democracy to get out of this murderous government. History will not forgive you for sitting on the fence. We know history is too far off for many of you to be bothered, but we are all watching.

It is time for our legislators, governors and ministers to choose whose side they are on. Are you for the people or a government that shoots its citizens?  Osinbajo, Lawal, Gbajabiamila, Amaechi, what do you say about the crimes being committed gainst humanity under your watch? We are watching.

This is the time for the army to disobey unlawful orders. There is still time to redeem yourself. The people want to know whose side you are on.

It is time for civil servants to down their tools and not go to work. It is time for market women and men all over the country to stop trading. It is time for judges and lawyers to make their voices count. Everyone must choose whether they are for the people or for the president that shoots our children. Buhari and his government will have to shoot everyone as we are no longer afraid.

Nigerians everywhere will not stop. We will petition the International Criminal Court to bring the people behind this massacre to justice.

Buhari has shed the blood of the innocent. We will never forget. Their blood cries out for justice. We cannot fail them. This day 20.10 2020 will become the dawn of a new Nigeria.  The day will come when Aso Rock, from where the order came, and Lekki Toll Gate, the site of the massacre will both become monuments for the EndSARS martyrs. PostcardfromLagos

Hi, I read your blog daily. Your humoristic style is witty, keep up the good work!